Around the world, the pandemic and the blockade of COVID19 have placed a huge burden on the public, governments and the economies of all countries. Although there are good reasons for isolation or confinement to prevent the spread of COVID19, they can cause various adverse effects in the form of physical, psychological, social and economic consequences. In particular, with social distancing, isolation and lockdown, people can suffer from very serious psychological problems, such as anxiety, stress, fear, overreacting behaviors caused by fear, depression, guilt, anger, boredom, sadness, worry, tension, helplessness, loneliness, insomnia and depression. Disruptions in employment, commuting, global industry, and supply chains and international trade have caused significant short-term adverse economic impacts.

In turn, these adverse consequences will cause tremendous social and psychological pressure, thus increasing the possibility of suicide. 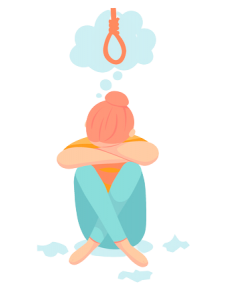 Suicide is one of the top 20 causes of death in the world. As the Coronavirus Disease (COVID19) crisis spreads rapidly around the world, many countries have reported suicide cases caused by the COVID19 pandemic. Individuals with suspected and confirmed COVID-19 infection, frontline medical staff, families who have lost loved ones, the elderly, children, and adolescents are susceptible groups, and the risk of suicide may be higher.

As early as February 12, 2020, there were reports of suicide due to excessive fear of contracting COVID19 from India, even if the infection did not spread across the country.

In extreme cases, social distance or social isolation can increase the risk of suicide. The following risk factors can trigger suicidal thoughts and ideas:

A 40-year-old man was admitted to the emergency room after attempting to hang himself. History revealed that around the first week of March 2020, a foreign couple asked him to take a photo during a routine morning walk. Later, patient began to understand the mode of transmission of COVID19 infection. As a result, he became worried and distraught that he could have contracted the infection from the foreigners. In the next two weeks, although he had no respiratory symptoms, he began to remain sad, overly concerned about his health, and told his family that he would die soon. He isolated himself from other family members, refused to eat, stopped talking with family members, and developed physical symptoms such as dry throat, abdominal pain, and fatigue, and attributed these symptoms to coronavirus/COVID19 infection. He kept on following the news about COVID-19, initially, he learned that it is related to high mortality and that death is painful. Later, he began to avoid watching the news because he became more anxious when he heard about the COVID19 infection. He could not concentrate on his work.

Fearing to develop a severe COVID19 infection, he began to think that instead of waiting for the progress of the COVID19 infection and dying painfully, he should die by some means. About 2 weeks after he was afraid of contracting COVID19, he tried to hang himself with a rope. A few minutes later, relatives found him, he was rescued and taken to the emergency room. He is medically stable and diagnosed with Adjustment Disorder Versus Severe Depressive Episode without psychotic symptoms.

In this biological disaster, people are not only under unprecedented psychological pressure, but are also forced to suffer stigma and discrimination when directly exposed to the COVID19 virus or families who have lost loved ones, which is related with an increased risk of suicide. Besides, many studies indicated that older adults, adolescents and children were the vulnerable populations that might be associated with a higher risk of suicide during the pandemic of infectious disease. Therefore, it is urgent to recognize that the burden of the psychological impact of COVID19 may exceed the burden of the pandemic itself.

On this basis, here are some considerations and recommendations for the prevention of pandemic related suicide, including

More importantly, early detection and timely intervention of people with mental disorders and suicidal behavior will effectively reduce the number of suicides. The specific measures are to use a validated scale to regularly conduct suicide risk screening, improve the availability of mental health services and provide appropriate and evidence-based interventions for those in need., Psychiatrists, psychologists, policy makers and other healthcare professionals need to collaborate to control the possible suicide events during the COVID-19 pandemic and future possible crisis.