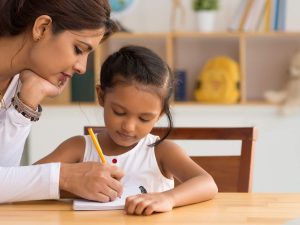 Developing a balance between trust and boundary setting is what I strive for as a School Counsellor.  I would like to share two short instances of these values in action in my work with the students.

One of the concerns that was constantly coming up in  7th grade was related to insecure friendships amongst girls. I  was asked to do an impromptu session in the class to address those concerns. Students were asked to sit with their friends and individually write down their expectations from each other and their ideas of friendship.

The students were then asked to discuss these expectations and ideas with their partners. The students realized that they all had different ideas of what friendship meant to them. Post this, we discussed the importance of having healthy boundaries and respecting what the other person wanted while clearly communicating our expectations as well.  Active communication and acceptance of differences in perception of friendship were very effective in helping them resolve their problems.

Recently there was a spate in the number of negative messages written in the primary washroom. It became increasingly difficult to identify who had written the messages on the walls of the washroom. The students then reached out to me and mentioned that they thought two students from their classroom were writing them. I spoke to the students to understand what exactly had happened. I consciously attempted at trust building by adopting a non judgemental attitude and giving constant assurances to speak the truth. This helped them feel comfortable enough to confess about why they wrote messages in the washroom. The students remarked that they could confide in me because of this accepting safe space given to them. They knew that I  would understand and not blame them. It speaks about an important realisation when it comes to parenting and teaching – it is very important to let children know that they will not be judged if they are honest and adults will be there to help them if they need support.