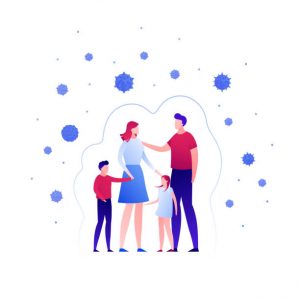 The world suffers from a pandemic thrice in every century, once every 30 – 35 years and its consequences often have lasting effects. The nature of the 2019 pandemic however has been said to have permanent effects on the essence of human interactions globally. As the world shut down, humans were expected to stay in isolated environments for over two years, resulting in emotional, social, psychological, financial and behavioural disturbances.

The nature of relationships and social interactions witnessed drastic changes as a result of the pandemic too. The virtual world became the real world and real people were converted into tiny faces inside computer screens. The subsequent effects of these changes on the development of relationships in women have been discussed in the article below –

The opportunities for people to socialise and interact with peers in a physical setting came down to zero due to the covid pandemic. Schools, colleges, public places and recreational spaces shut down for over a year. This resulted in social isolation for a population that largely depends on peer interaction for identity formation and validation. Peer support for women is crucial and social isolation results in an increased risk for depression and anxiety. People began to become heavily dependent on their gadgets for entertainment consequently diminishing their motivation for human interaction. Cases of social anxiety, suicidal ideation, self-harm and eating disorders rose in women as a result of these environmental changes.

To avoid mental health burdens during this time, it is important that efforts to support are driven by expert stakeholders including the youth and families themselves, child psychiatrists, psychologists, social workers, paediatricians, and other experts on women’s mental health. This also means providing women with opportunities to express their emotions around the pandemic, providing avenues to stay connected with their peers in physically distant ways, and, for younger children, allowing them time to play in order to help foster a sense of safety and security and facilitate healthy development.

Surrounded by messages of loss and sickness, women may develop a fear of contracting and spreading infections to family members, causing them great anxiety and largely increasing the development of obsessive-compulsive disorders specifically for this gender. In instances where a family member is infected and hospitalized, women have been observed to handle multiple financial and domestic responsibilities simultaneously. All of these factors have taken a terrible toll on the mental and physical health of women. Separation from or loss of a parent has been shown to raise the risk of mood disorders and psychosis in the long term, as well as death by suicide in adulthood.

To minimize fear and anxiety in women, it is important that they be given the tools and resources to talk about COVID-19 in an appropriate manner. To avoid the development of unhealthy attachment styles there must be widespread measures by the government to promote psychological counselling and other initiatives that can enable people to develop acceptance and promote positive thinking patterns that will enable them to deal with the situation efficiently. Women have been observed to have greater needs of emotional expression than men, therefore providing them with a support system to share their concerns would drastically reduce the extent of mental stress and fatigue.

The lockdown has had an overall positive impact on love and dating. As people had far more time to concentrate on themselves and their relationships, they have begun to introspect the true meaning of life. This introspection is encouraging couples to re-evaluate their values and, therefore, feel responsible to sort out personality defects. Couples have become closer than ever before. They have had an opportunity to spend time together, do shared activities and delve into deeper conversations. However, cases of domestic partner abuse and violence have also seen a surge in 2019. An increased rate of stress as a result of financial and personal losses has resulted in frustration that some may direct towards their partners causing an increase in the friction between their relationships.

Finding partners without ever having to step outside has also been an upside of a pandemic in the digital world. Finding creative ways to spend time together via virtual dates, using shared screens to watch movies together are some ways in which couples can enjoy time together without having to physically be together.

While the pandemic has resulted in a major shift in the world, it has been found that those who have adjusted positively to this change have survived and this has been no different for women too. Identifying your circle of support and reaching out for help when required are the first steps that must be taken to ensure overall wellbeing.